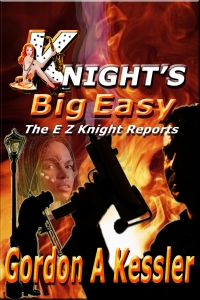 This is the first episode of “The E Z Knight Reports” series, and is a prequel to Knight’s Late Train and Knight’s Ransom (includes Jazzy Brass’s debut!).

Killing isn’t easy for E Z Knight. But when he’s murdering really despicable bastards, it’s not all that difficult, either.

In Knight’s Big Easy: Voodoo, hoodoo and a girl named Poodoo make this year’s Mardi Gras the most fun but also the most dangerous party of all for E Z Knight.

He uncovers the largest human trafficking organization since the US slave emancipation. Led by a Voodoo King named Papa Legba, the slave ring preys not only on young runaways and homeless children, but also kidnaps them from their own homes, and then sells them into prostitution and sweat-shop labor.

Knight works with a retired jazz musician named Black Zack who restores old horns in a shop called Jazzy Brass. They team up with FBI Special Agent Pooh Dooley to find Billie and to stop the slave-traders. However, Knight’s old musician sidekick might be more than he appears. Black Zack claims the marijuana he smokes is for medicinal purposes. But when the pickup the old horn tooter’s driving is run off the road and catches fire, smoke from the alfalfa bales in the back gives Knight a high unlike any he’s had before.

Time is running out. A cargo ship loaded with over 500 children is away to the deepest waters in the Gulf. With the threat of being exposed, Papa Legba has ordered the ship sunk as soon as it reaches Sigsbee Deep. But Knight’s not that worried about dealing with the two-dozen armed men on the slave ship, or the nighttime HALO jump he must make to carry out the rescue—it’s the Voodoo Queen named Marie who won’t rest until she’s turned E Z Knight into a zombie that’s making his skin crawl!

A prequel to Knight’s Late Train and Knight’s Ransom, Knight’s Big Easy is the first novel in ”The E Z Knight Reports”; a sexy, humorous and irreverent series as well as a somewhat realistic and poignant look at the darker side of life, crime and the human condition. With a modern-day, ramped up “The Rockford Files”/”Magnum PI” feel, a Jack Bauer-capable hero and a “24” pace, it consists of page-turning, episodic novels.

(Spoiler alert: This is Jazzy Brass’s debut. Black Zack’s female golden retriever is pregnant. At the end… well, you guess—)

All she’s wearing are Mardi Gras beads, a holstered .45 and a smile that stretches all the way across her lovely face.

The beautiful redhead stands over me in her magnificence — I seem to be lying in her bed.

I’m saving my words. I want to hear more of what she says first. If I ask her where I am, she’ll know I’ve awakened without recall and might shape the last few hours’ events to her liking and without regard to my perception.

I slowly scan her lovely body, taking the time to admire every inch of her, and I think this must be a dream. The DoubleTap .45 ACP pistol doesn’t concern me yet, since it’s still snuggled in the small leather holster she has strapped to her thigh.

Believe it or not, a lot of the women I regularly hang with wear a holstered handgun of one kind or another. For some I think it’s a power trip — a sort of dominance thing. Many of them seem to get a rush from wearing their own phallus when they make love. I don’t care for this practice so much, myself.

But, man-oh-man, I have to admit I love the women who do.

A sheer window curtain beside the bed flows airily in a light, warm breeze and a small television on a nearby dresser is turned low. On the TV there’s a parade with soft street noise; a little traffic and muted voices.

I try to move on the sweat-dampened bed, but I can’t. Quickly I realize I have no clue where I am or how I got here — or how I’m going to get these damn fur-lined handcuffs off.