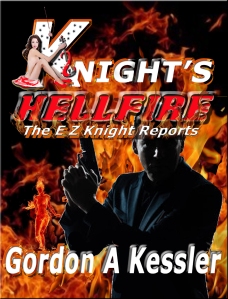 KNIGHT’S HELLFIRE Book One (expected to be published October 2012) This is the one that started it all.

I just returned from a botched hostage rescue and political assassination mission in the Middle East, and I brought Hell back with me. I can’t trust my former assault-team members. Half of them have been murdered, anyway. Now someone very evil with an army of assassins is stalking my wife and kids, too.

The smart folks will tell you not to piss me off, or you could end up dead. They’re the same ones who have me against a wall of claymore mines–the ones running for cover, because I’m about to explode.

Make no mistake, there will be a costly reckoning today–and the body count very high.

My name is E Z Knight, and I live inside thriller author Gordon A Kessler’s head. Step in out of the cold, find a seat and make yourself comfortable. But strap in, because you’re in for one helluva fiery ride!