Get It Now: Only 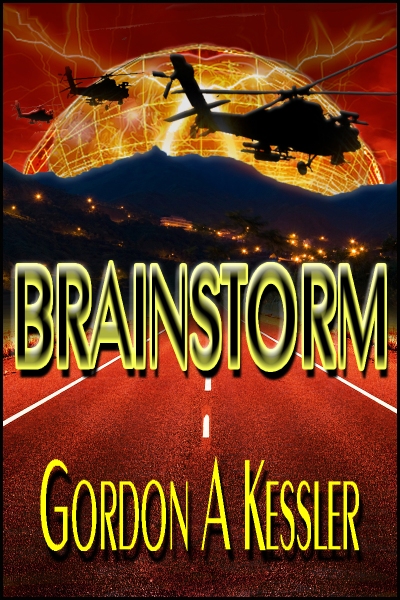 –James Rollins, NY Times bestselling author of the action thrillers Map of Bones, Black Order, The Doomsday Key and many more, says: “Gordon A. Kessler’s BRAINSTORM is a wild ride into the reality of human consciousness, forcing us to question who we are and our place in the universe. It’s also a kick-ass adventure story that will have you thrumming through the pages well into the night. Its blend of topical research, cutting-edge weaponry, and current political tension is handled with stunning effect.”

–Douglas Preston, NY Times bestselling author of the thrillers Relic, The Codex, Book of the Dead and many more, says: “BRAINSTORM is as exciting and fast-paced as a thrill ride on a dive bomber, a maelstrom of action, violence, murder and mayhem, way too much fun to put down once you’re hooked. It is also frighteningly believable, based on an actual black CIA program known as ‘Project Stargate.’ Kessler is a former US Marine parachutist, recon scout, and ‘Super Squad’ team leader–and he really knows his stuff. An outstanding novel.”

BRAINSTORM: What if a small American town is secretly replicated, populated with kidnapped scientists and psychically talented civilians, and then used as a proving ground while training psychic assassins? Political and military leaders of the Free World are the targets of these psychic warriors, and Project Brainstorm’s goal is world domination.

Gold Rush seems to be just another sleepy little Colorado community full of friendly, caring citizens, quaint cottages, and a sort of quiet peace, held gently by the picturesque mountains that surround it. However, something isn’t right in Gold Rush, and early on a Monday morning Robert Weller awakens with a cautioning and insuppressible voice inside his head. He soon finds a secret behind every door, a motive with every glance, and a lie beneath every spoken word. After meeting a strange but beautiful woman named Sunny who insists they were once lovers, people begin dropping dead around him without apparent cause. The world he thought he knew twists upside down as paramilitary teams hunt him, and his own wife and the people he considers friends turn against him.

Weller is thrown into the middle of a military mission to rescue thousands of the town’s citizens from a plot to destroy the free world. In time, Weller discovers he was once the CIA’s top remote viewer, and it’s not just the bad guys who will lose if he survives another day.

BRAINSTORM goes beyond the bounds of ordinary reason. It blends the past (the CIA’s “Project Stargate,” a twenty-year exploration into remote viewing and psychic powers as background) with the present (incredible new developments in nonlethal weapons such as acoustic cannons, sticky foam, anti-traction substances, electromagnetic pulse devices, and infrared lasers). And it throws in a very sobering reminder; that there are still thousands of American MIAs from the Korean and Vietnam Wars.

Gordon A. Kessler is a former US Marine parachutist, recon scout and Super Squad team leader with a bachelor’s degree in creative writing. His book NOVEL WRITING MADE SIMPLE is considered by many writers as an important tool for both beginning and seasoned novelists. Those who have read his first two thrillers, JEZEBEL and DEAD RECKONING, agree that they’re extremely hard to put down. Kessler’s website WritersMatrix.com is an excellent Web resource and reference and a landing page for all writers. He is a full-time novelist and lives in the Midwest with his golden retriever, Jazzy Brass.