Dog Park for Toddlers? How about crossing the track during the Indie 500?

It happened again today. A small child was hurt.

There are a lot of really great young parents out there. They love their children dearly and only want what’s the very best for them. Sometimes they don’t think things through before they do them, deciding, “Oh, how much fun it would be to take Junior to …” Some folks who haven’t been to a dog park have no idea what goes on there.

Well, here’s your warning, good-intentioned but inexperienced parents: what goes on at a dog park is utter chaos!

What? Chaos at a dog park? Someone should do something! Someone should enforce order so that all dogs walk, not run; lick, not play bite; romp and play like kiddies and not run amok and wrestle like … well, like — dogs!

If you’ve been to a dog park, you know that most of the animals are out there just 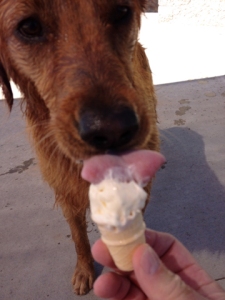 having a great time. Even my sweet Jazzy Brass, one of the most pleasant dogs you’ll ever meet, gets a little nuts. It’s the dogs’ place to be dogs, to do what dogs do. They want to chase each other, play bite and wrestle. There are small dogs, and huge dogs, and as long as the “alpha” male or female doesn’t come out in them, the time spent in the park can be a blast for both dogs and their caregivers.

But, if you’ve visited one of these fun places more than a couple of times, you’ve most likely seen some little accidents, sometimes not so little. Adults have even been known to get mowed down by dogs being dogs. These dogs don’t watch where they’re running, they’re just enjoying the chaos at the time. A person can easily get hurt, if they’re not keeping an eye out. The canines are excited, they’re letting off steam. You’re the cheerleader when you’re at the park, and your beloved companion is the player. If you’re a smart cheerleader, you don’t go onto the playing field in the middle of a game without being sure you won’t get trampled.

As soon as I saw it, I knew there would be trouble. A young mother with two small dogs and a medium-size one on leashes had entered the park’s main gate with a toddler in her arms. Hmmm. Obviously, she was thinking of how much fun was about to be had, but not considering she was leading three primed and ready rugby players onto the field of a very active game in progress. Within five seconds, she was down on the large concrete entryway, and she had dropped her little girl face first onto the hard surface, as well.

What could I do except run to her and try to keep the excited pack of dogs that quickly gathered away from mother and screaming child while they attempted to recover and find their legs?

Damn it! What a shame for the little girl who ended up with a bloody chin and a huge knot on her forehead. Accidents happen. This young mother certainly would have never risked her child’s wellbeing had she actually considered the danger.

It’s one of my pet peeves and this is a warning to others, old and young, short and tall. Dog parks are for dogs to play and have fun — to be dogs. It’s not a place for an overly aggressive dog. It’s not a place for elderly who can’t move out of the way of a large pack running at full speed. It’s not a place for a toddler even with close supervision or in a stroller. Sure, it’d be fun to see Junior reacting to all the nice little puppies. How about keeping Junior outside the fence? Here’s an idea; what about taking Junior to a pet store (the puppy mills that supply them are a whole other story)? Even better, take Junior to see all the really cute doggies and kitties at the local animal shelter!

Please stop and think. Don’t bring your small child inside the gate of any dog park. And, when you go with your best friend and constant companion, keep on your toes and be ready for a great time!